Guest Blog: Art and nature: An approach to imitate, create and preserve 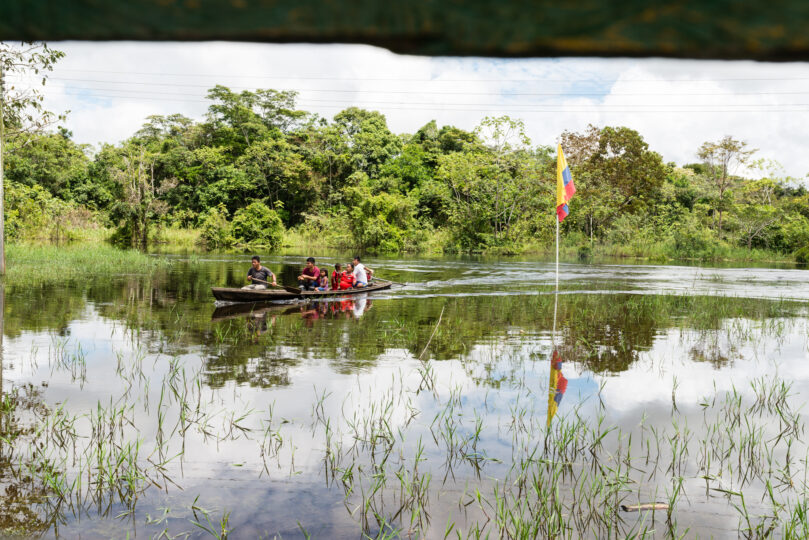 Elizabeth Valenzuela works at Colombian NGO Fondo Acción, and was part of the second cohort of Creative Climate Leaders in October 2017.

To preserve nature and life in all its forms, including ours, leads us to think of concrete actions to give each element the best possible use. It puts us, in many cases, in the role of observers and facilitators of change to understand what we have today, but also raises questions about the past and the future.

It confronts us with the experience of contemplating and reminds us how we began to imitate nature: the songs of the birds at dawn, the sound of the water that falls, the wind that breaks the calm. Nature then becomes a source of inspiration. Since our arrival as a species on this planet we began to leave tracks of our ability to observe it and we recorded drawings on some rocks. Today we know about our relationship with some species of animals that are already extinct, because of the drawings made by other people hundreds of thousands of years ago.

But even before drawing, music could be our first form of expression. Music starts with the voice and the need to establish contact with others. Music combines our thoughts and feelings, even more than words. Because music emerges from our right cerebral hemisphere (which keeps our ability to express and capture emotions), while speech develops from our left hemisphere (in charge of rational thinking). That’s why we say that music is universal.

Music is created in nature. The songs of the birds, the movement of the tides or the thickness of the forest are transformed into melodies and the voices of those who sing, but the same instruments are made from the forests.

Some musicians, such as Vivaldi and Stradivari, walked through some pine forests to hear how their trees sang with the wind that moved them and made them sound like bells; they later chose these trees to make their instruments. Trees that had lived for hundreds of years and then, transformed into violins, would last hundreds of years with us. Some of these forests are disappearing, perhaps with it the violins and their sounds.

Closer to our rhythms, the trees and palms of the jungles of the Pacific are transformed into marimba, cununo and guasá. Making a marimba, following the tradition, requires listening very well to the tides, the ups and downs of the water level in the river and the sea. Then, when it is played and resonated, the marimba remembers the sound that gave rise to it. To have today marimbas requires conserving both jungles and the memory and knowledge of those who manufacture them.

It is these relationships that lead us to admire the harmony of nature as a whole and the perfection of its parts and its relationships. We ask ourselves questions and look for answers in science and in art. With science, we try to understand and explain the Whys. With art, we seek to imagine possible universes and offer those who observe an invitation to finish the works, which are no more, figured out as closed products, but require someone to read, feel, sing or look to finish them. They are not opposite, but complementary approaches.

One meaningful sample of these connections is the performance “Recreating Vivaldi, because your change sounds”, that combined scenic and visual arts in a completely new and impressive proposal. In chamber orchestra format, this action represents climate change from the perspective of art, and one of the works icons of the universal repertoire “The Four Seasons” by Antonio Vivaldi.

The Italian musician wrote four sonnets to represent the relationship of the human being with the cycle of the four seasons. Based on these texts, the composer made a musical transcription of its contents, creating four concerts for violin and orchestra. Consequently, each concert describes scenes in which human beings and nature coexist in a state of equilibrium, which we do not live in our daily lives.

In the current representation, musical modifications were made to show the impacts of climate change and to recreate the history of the relationship between the human being and nature. Symbolized moments of history as the industrial revolution, wars and the destruction of the environment and the era of consumerism. Then, a situation of interaction with the public was generated, which is precisely the key to the positive outcome of the work.

This performance was made by Bogota Symphony Orchestra Foundation with the support of Financial Management Committee of the National Climate Change System of Colombia, the French Development Agency and Fondo Acción. Fondo Acción is a private, non-profit foundation created in the year 2000 that supports and make visible significant change processes through high value, innovative solutions, hand in hand with communities and the private sector, concerning vital issues for the country such as: sustainable rural development, conservation, climate change, and childhood protection and development.

Arts and Culture at the Heart of Climate Action

This website uses cookies so that we can provide you with the best user experience possible. Cookie information is stored in your browser and performs functions such as recognising you when you return to our website and helping our team to understand which sections of the website you find most interesting and useful.

Strictly Necessary Cookie should be enabled at all times so that we can save your preferences for cookie settings.

If you disable this cookie, we will not be able to save your preferences. This means that every time you visit this website you will need to enable or disable cookies again.